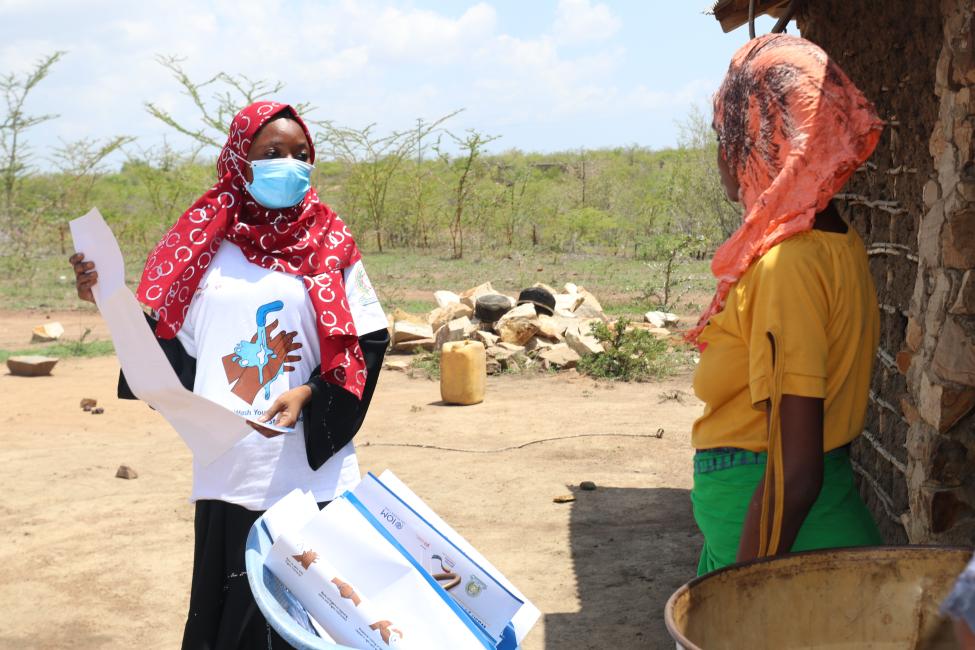 Border areas are often home to marginalized communities while also hosting in-transit populations that are highly susceptible to infections of communicable diseases, including cholera, dysentery, COVID-19 and even Ebola. With this in mind, the International National Organization for Migration (IOM) in Kenya, along with the Ministry of Health, reached over 380,000 residents in Lunga Lunga, and Namanga with awareness and prevention messaging in December 2021.The two settlements are in the Kenya-Tanzania border region. Despite being hives of activity for traders, truckers and others, they lack adequate provision for housing, toilets and running water.

“I hardly wash my hands before preparing or during meals and I have never been sick,” said Mwambinji who lives in Lunga Lunga. However, after engaging with the campaign staff, he said he will start washing his hands and will also encourage others to do the same. “Prevention is better than cure,” he added. The health messaging was part of a campaign organized through the East African Community (EAC) with funding from GIZ, the Deutsche Gesellschaft für Internationale Zusammenarbeit GmbH.

Apart from border areas, the campaign is also running in transport hubs and water ways, as well as in fragile urban communities. Among those targeted with COVID-19 messaging over a three-day period was Miritini, a settlement in Mombasa. It is best known as a point of departure for trucks travelling between the Port of Mombasa and the wider East Africa region – especially landlocked countries, including South Sudan, Rwanda, and Uganda.

It is envisaged that the campaigns will contribute towards the implementation of the EAC’s COVID-19 Response Plan (2020), as well as IOM’s COVID-19 Strategic Response and Recovery Plan launched in April 2021, together with relevant regional plans. The campaign in Miritini focused on the benefits of vaccinating against COVID-19, demystifying myths and perceptions, as well as how to access COVID-19 vaccines. In the wake of such messaging, more than 300 truck drivers and residents were vaccinated, and the numbers have continued to rise.

In Nairobi, the campaign ran in Eastleigh, a densely populated urban area that is home to migrants predominantly from Somalia, Ethiopia, Eritrea, and other East African countries. Residents, including the host community, grapple with access to clean and safe water, sanitation, and hygiene, along with having few opportunities for the safe disposal of garbage – which currently ends up on the street.

“We treat a high number of patients for typhoid, cholera, diarrhea and other illnesses due to poor sanitation and hygiene practices. Educating residents on the prevention of communicable diseases and proper sanitation and hygiene is a good move towards reducing such cases,” said Janet Oneko, a clinical officer at the Eastleigh Community Wellness Centre (ECWC).  The centre is run by IOM Kenya and AMREF, an international non-governmental health development organization, in partnership with the Nairobi Metropolitan Services (NMS). In 2021, more than 17,000 patients were treated at the facility, which provides primary health care services.

“I have learnt how to dispose garbage properly especially used diapers, the importance of keeping my toilet clean as well as frequently washing my hands. I will follow this advice to reduce hospital visits by my family members because of diarrhea,” commented Samaria Hussein, among the residents touched by the campaign.

To complement the community health campaigns, health related messages were due to be broadcast on radio in English and Kiswahili targeting the four locations, with the aim of reaching a wider audience.

Subscribe to IOM newsletter to receive the latest news and stories about migration.